Only had less than 12hr of sleep, which is kinda annoying because I was aiming for at least a 13hr. I had weird dreams last night. First, I was with a guy daw and we went upstairs to, like, a balcony or something. I don’t know who he is but it seems like we are in a relationship coz we started kissing. After a few minutes, he suddenly jerked away and said one of his muscles snapped. Before crying for help, I saw his left eye turned red (there was a red line on the left). I went down and said “call 911” and explained what happened.

When we got upstairs, he’s already down the floor lying. His eyes went big, too big, like bigger than an owl or a tarsier’s. His eyeballs are so black it occupied his entire eyes. I wasn’t crying because I was too shocked by what’s happening. Right before someone shoved me away, though, he just lay there, looking at me, like crying for help. End of dream number one.

In my next dream, I was with a woman. I was a nurse, or maybe just a volunteer since I’m really not a nurse in real life. I forgot who the woman I was with. After tending to a patient, we ride the elevator to prepare to go home. It was morning already, like 4 or 5am. We got stuck in the elevator when, suddenly, a baby cried. I look above and saw me and a baby playing. I don’t know who the baby is, all I know was that I was playing with it. I saw a doctor on the monitor signaled to me that it wasn’t a real baby; it was actually a spirit. The me in the elevator stared at the woman, telepathically asking what do we do. We listened and waited for the elevator to open, while the me from above saw the baby crawl from the other elevator. I didn’t see its face because when it was about to reveal itself, the elevator with me and the woman suddenly opened and the next thing I knew, we were already walking towards nurses lounge. The head doctor asked the two of us to stay, even if it’s already time to go home, and assist that patient (whoever that was). I wasn’t pissed, but I said I should text my Dad to let him know I wasn’t coming home. Another woman in front of me called me then. I think she’s one of my teachers in high school (or was it college) or one of Mommy’s former officemates. She asked me how am I and I said fine… I think. I then motioned for the other woman, the one I was with in the elevator, that it’s time to leave and do our job, so we got up and head for the door. End of dream two.

What the hell did those mean?

—
My throat’s still acting up. I don’t know what the f*ck is happening with it. I should go to the doctor as soon as he comes back.

—
The kids are here. Last night we went out. Phoebe actually wrote a letter to me for my birthday. Here take a look: 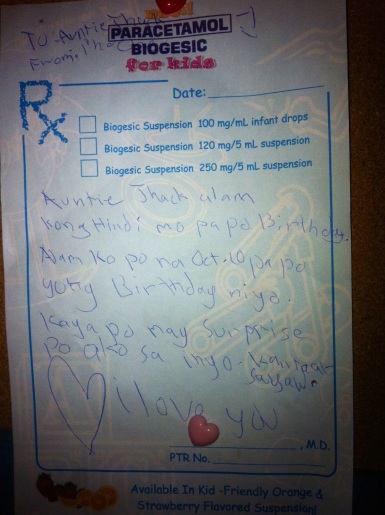 —
I really want to go back to sleep but it’s getting hot in here and my niece is waking me up. Maybe I’ll just try to get some sleep later. I really hope I can still get some sleep.

UrbanDictionary defines brain fart as a Blurb in your head outta nowhere, train of thought. This is exactly what this blog is all about - a collection of thoughts that pop out of my head that I can't get rid of. I promised myself I will not censor this blog so I'm not gonna apologize with whatever you may read here, but you can read more about me and this blog on my Introducing Me page.
KTHXBYE.

Oh and one more thing… 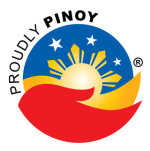